By guest blogger Morgan Raymond
I do.Sam Bradley has been the cause of several small earthquakes in my corner of the world, none of them bad, but all causing my family, and me, to look at our lives in ways we never imagined.I doubt he realizes half of what he has done, but all of it has been good.This guest post is just another in a line of lovely experiences which can be directly traced back to him.

Almost two months ago, Sam linked this blog in a Tweet, sending myself and a bunch of my friends to check out the delicious recipes and delightful reminiscences of one amazing lady.Through reading “Jewels” from The Roving Stove and chatting with Julie Anne in comments, on Facebook and Twitter, I feel that I have made a new friend.Thanks, Sam!

At the beginning of August, Julie Anne posted that she would be cooking with Chef Joe DiMaggio Jr., a name I recognized from a recent cover story in a local area social activities guide.I mentioned to her that Chef Joe’s restaurant, SaZa, was in my city, but I had not eaten there.Jewels urged me to go, and then stunned me by asking me to share my experience in her blog.As an aspiring writer, and an adventurous diner, it was an offer I couldn’t refuse.

My husband, Terry, accompanied me on a humid Tuesday.The restaurant is located in a newly renovated area of downtown Montgomery known as The Alley.Several restaurants, shops and nightclubs are nestled together in a large city block and split by a paved brick alleyway, giving the area a faintly European air.

We arrived at SaZa about 6:30 in the evening.Tables set out on the sidewalk were already lively with diners.A woman listened to an artist busily explaining his design as he painted on an oversized fishing lure, his dog resting comfortably in a kennel nearby.We walked around them into the alley, and passed a long outdoor bar stretching towards the front door.Before we reached it, the door was thrown open.The hostess welcomed us in and allowed us a moment to look around. 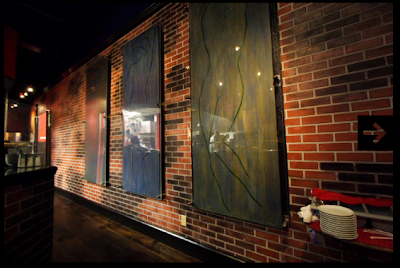 Hardwood floors and exposed brick walls are complimented by sleek black tables and bold works painted by local artists.It is very inviting.The kitchen is open, separated from the main area by a dining counter.I considered sitting there, but decided that we might be more comfortable at a table rather than on the high stools.Next time, I’ll take the counter, so I can watch the chefs construct this beautiful food!

I spotted Chef Joe in the kitchen as we were being seated and pointed him out to Terry.I intended to let him know that ‘Jewels sent us’, but by the time I asked our server about him, he had gone for the evening.Oh, well, guess I’ll just have to go back… darn!

SaZa features an intriguing array of pizzas and pasta dishes, along with some very interesting appetizers and salads.I originally planned to get Grandma’s Eggplant with San Marzano tomatoes, fresh mint and grated Reggiano cheese for our appetizer, especially after I saw the photo of it on Jewels’ post.However, I had made some fried eggplant at home earlier in the week, so Terry and I decided to try something else.After all, we were being adventurous.

I don’t know why, but I expected this to be a firm polenta, possibly served in slices.Instead, it resembled a hot dip.It came in a lovely handled bowl, garnished with a sprig of thyme and a hint of the provolone that was melted throughout.I pulled out my camera, snapped a couple of shots, our server brought us spoons, and we dug in.

I had to stop to send a tweet at that point, something about “swooning already from the appetizer.”It was delicious; hot, creamy and very cheesy, with plenty of mushrooms and chunks of artichoke.I briefly considered asking for some SaZa Garlic Styx for dunking, but I could have eaten a couple of baskets of those alone, and then I would have had no room for dinner.

I tried to take my time and really savor the polenta, but it was so good, and did I mention cheesy?It disappeared much too quickly.Terry gave me a funny look for trying to get the very last bit from the bottom of the bowl.I couldn’t help it.Oh, Chef Joe… you have turned me into a wanton woman.I’m wanton your polenta!

Shortly after our server wrestled the polenta bowl from me (not really), she returned with our entrees. Terry ordered the Chicken Piccata with Lemon Chardonnay Beurré Blanc, artichokes,mushrooms, and capers over lemon spaghettini.I had to have a taste.The chicken was juicy and flavorful, the sauce full of vegetables and so smooth.The lemon flavor was more pronounced than I expected.My idea of Italian fare leans towards tomato-based dishes rather than citrus.It was different, but still very good.It was a bit more lemon than I personally prefer, but Terry liked it, and all I got was that one bite.

I tried Grandma’s Pasta Fagioli , made with Tuscan beans, Prosciutto,exploded garlic, and escarole.To be honest, I wanted to try this to find out just what ‘exploded garlic’ was.Also, I had never had pasta fagioli before, and was surprised to discover that it was a soup.It was superbly seasoned, chunky with beans, garlic, prosciutto, and just enough pasta to slowly absorb the delicious broth.And apparently, ‘exploded garlic’ just means “a whole lotta garlic, chopped up and sautéed until it explodes”.Definitely my kind of dish!(I’m certain I was Italian in a previous life.)

I did bring home about half of my pasta fagioli, and then had to defend it from my teenage son who thinks all leftovers boxes are his by divine right.I shared a little with him, but not much.

The food was very good, the atmosphere was comfortable and we didn’t feel rushed at any time.I do intend to go back soon, probably for lunch.There are two kinds of lamb pizza I must try, as well as a rustic sausage sandwich with peppers and onions.

Thank you for the invitation to do this, Jewels!We had a wonderful time and I’ve enjoyed putting this post together. I promise to say “Hi” to Chef Joe for you the next time I’m there. Now where’s that menu?I need to ship some polenta to Sam…

Massive thanks to Morgan Raymond for being my restaurant spy, and reporting back to us about my friend Joe DiMaggio’s restaurant SaZa Pizza in Montgomery, Alabama! If you would like to be a restaurant spy in your city and write a guest blog post for “Jewels” from The Roving Stove contact guestblogforjewels@gmail.com for more information.