Astrid Wyman, Andy Taylor, Julie Anne Rhodes, Steve Strange, and Francesca Thyssen
I did have a fabulous trip planned this week to visit one of my favorite people on the planet (my philanthropic, larger than life, visionary friend Francesca Thyssen), in an exotic land I’ve yet to explore.
The celebrations began yesterday with the unveiling of The Morning Line, an audacious project placed next to the spice bazaar at Eminönü Square, Istanbul. It’s an incredible achievement instigated by the Thyssen-Bornemeszia Art Contemporary(also known as T-B A21), innovator Matthew Ritchie, architects Aranda/Lasch, engineering firm Arup AGU, the sound lab at the University of York, and a group of innovative composers. 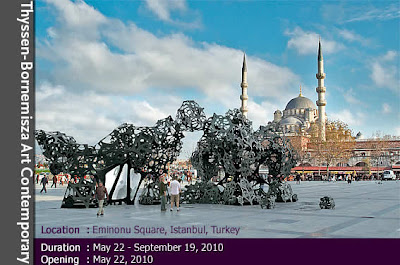 The Morning Line courtesy of T-B A21

This is how Art Plus magazine describes it: “The Morning Line is a public art structure, 8 meters high and 20 meters long, built of 17 tons of black-coated aluminum. The structure explores the disciplinary interplays between art, architecture, music, mathematics, cosmology, and science.”

That spectacular evening was to be followed by the inauguration of T-B A21’s Contemporary Music Festival consisting a group of composers and musicians hand-picked by guest sound curators Russell Haswell, Malih Fereli, Kamran Ince, and Cihat Askin. A sight-seeing tour of Istanbul was scheduled to include the splendor of Blue Mosque built in the 17th century, the Hippodrome where chariot races were held during the Roman Empire, St. Sophia Museum built by Byzantine Emperor Justinian circa AD 535, and the legendary palace of Ottoman sultans- Topkapi Palace. Of course I made sure there would be plenty of time to shop the market, most likely getting lost for a full day in the spice bazaar.

Julie Anne Rhodes: fast cars and men
Next was a journey rich in history to Sirince, Esphesos, and Aphrodisias on the Agean sea named after the Goddess Aphrodite. We would explore aqueducts, temples, theaters, and palaces in addition to Turkish coffee ceremonies and wine tasting (or in my case… wine sniffing). Capped off with the Formula 1 Grand Prix back in Istanbul before, just like Cinderella at the stroke of midnight, returning to my real life in Los Angeles.

Julie Anne Rhodes grounded
I was shaky but determined to go when Iceland’s Volcanic God’s threatened to disrupt my travel plans, but when British Airways announced a strike on the very day I was to leave for Istanbul I decided the universe was sending up too many red flags to travel at this time. Unlike my hero The Traveler(who generously gave me tips on where to eat in Instanbul), I am but a tourist at this stage of life, and had to be back on time for business obligations. I despondently canceled, and for the time being at least, I will have to limit my Turkish delights to this fabulous recipe Banul Basol shared with me recently.
Artichoke with Fava Beans
This is a delicious example of Mediterranean cooking that also happens to be one of the healthiest diets in the world. Typically, the diet is rich in healthy fats, plant proteins in addition to smaller portions of animal proteins, and tons of fiber.
Servings: 8
Ingredients:
Directions:
1). Heat oil in a broad pot, stir onion and green onion, and let them soften a bit. Add fava beans, mint, and half of dill. Stir for 3-4 minutes. Add lemon juice, sugar, and hot water.
2). Place artichokes in the pot: pointy sides facing up. Seal the pot with aluminum foil and place the lid. Cook on medium heat for 25 minutes (or until beans are cooked). Once you turn it off, you can add salt.
3). When the artichokes have cooled a bit, place them on a serving plate and stuff them with fava beans using a spoon. You can use the rest of dill on top as decoration.
Serving Suggestions: Eat as an appetizer or one of several dishes served tapas style as a meal.
P.S. Nearly last chance to enter the competition to win CLOAK & DAGGER BUTTERFLY by Amanda Eliasch. Enter your “ladies that lunch menu”here. Competition closes May 30th. Our top four favorite menus will be posted in a pole on the blog, and YOU will choose the lucky winner.
« Previous PostNext Post »
Tags: Andy Taylor, artichoke, fava beans, Francesca Thyssen, history, Istanbul, Julie Anne Rhodes, Mediterranean diet, T-B A21, The Morning Line, travel, Turkey, Turkish delights