Julie Anne Rhodes
In 1990 I was a founding member of Parents for Safe Foods, a group of high profile mothers in England that were concerned about the amount of pesticides, hormones, additives, genetic engineering, irradiation, and other undesirable and inhumane food production practices. We marched on 10 Downing Street, and published a book to raise awareness. Unfortunately, twenty years later the state of the food industry has become frighteningly worse, and in many ways, much more so here in the United States.
Cynthia Occelli, Twitter friend and fellow blogger extraordinaire, miraculously coaxed me into doing a vegan, anti-inflammatory, hypo allergenic cleanse with her recently which resulted in a renewed reverence for food; for both it’s healing and potentially damaging effects. Cynthia’s cleanse wrap-up email was too important, to not share with all of you, so I asked her to do a guest post.

Hi! My name is Cynthia Occelli and I write the blog: LIFE: It Isn’t for the Faint of Heart, a blog about living one’s best life using common sense, spirituality and wisdom. It is an incredible honor for me to guest blog on “Jewels” from The Roving Stove today. This blog rocks and Jewels is nothing less than treasure. To top that off, I get the rare privilege of writing on something I don’t address on my blog: the hidden dangers in our food. Hopefully, by the end of this post, you’ll have learned something new, if not leave a comment below and teach me something! Here goes:

“Let food be thy medicine and medicine be thy food” –Hippocrates

Unfortunately, we cannot rely on manufacturer’s or the FDA to ensure that our food is safe or good for us. There is a growing body of research indicating that what we put in our bodies, on our skin and in the air is responsible for a large portion of disease. 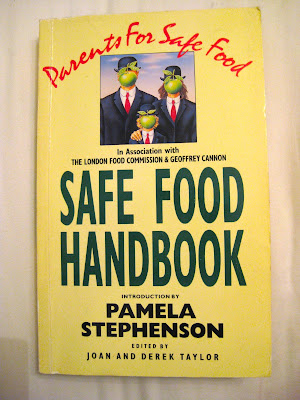 1.Partially Hydrogenated Oils–They’re killers. These can be ANY kind of oil (cottonseed, soybean, vegetable, etc.) –hydrogenatedis the word to look for. You can usually find it in margarine and shortening, fried foods, doughnuts, cookies, pastries, crackers, processed foods, salad dressings and mayonnaise. More than a decade of research showed that consumption of trans fatty acids from partially hydrogenated (a process that adds hydrogen to solidify or harden) vegetable fats and oils had many adverse effects in health areas such as heart disease, cancer, diabetes, immunity, reproduction and lactation, and obesity. (via Dr. Mercola, Dr. Mary Enig Interviewed By Richard A. Passwater, Ph.D.http://bit.ly/9tadX7)

2.High Fructose Corn Syrup, Crystalline fructose, fructose– It makes you fat, feeds cancer, is usually GMO and can harm the liver. Beverages containing high fructose corn syrup have high levels of reactive carbonyls which are linked with cell and tissue damage that leads to diabetes. The corn from which high fructose corn syrup is derived may begenetically modified. Even seemingly “health-conscious” beverages like Vitamin Water, Jamba Juice and Odwalla SuperFood contain fructose. Certain cancer cells grow on HFCS. Rats with access to high-fructose corn syrup gained significantly more weight than those with access to table sugar, even when their overall caloric intake was the same. (via How to Avoid High Fructose Corn Syrup – WikiHowhttp://bit.ly/bYO73Q)

3.Genetically Modified Foods–GMO–They’re covered in pesticide and associated with a ton of health problems. When a package contains “Soybean Oil” and doesn’t specifically state somewhere that it’s NON-GMO, it is overwhelmingly likely to be GMO. There is no requirement to disclose it. “Currently, up to45 percent of U.S. cornis genetically engineered as is85 percent of soybeans. It has been estimated that 70-75 percent of processed foods on supermarket shelves–from soda to soup, crackers to condiments–contain genetically engineered ingredients . . . A number of studies over the past decade have revealed that genetically engineered foods can pose serious risks to humans, domesticated animals, wildlife and the environment. Human health effects can include higher risks of toxicity, allergenicity, antibiotic resistance, immune-suppression and cancer.” (via Center for Food Safetyhttp://bit.ly/cvuwz8)

4.Conventional Produce(produce sprayed with pesticides) – Pesticideis a low dose of toxin deadly enough to kill bugs, but it does just disappear.Various studies have connected pesticides to nervous system toxicity, cancer, hormone system disruption and skin, eye and lung irrigation, according to the Environmental Working Group (http://www.foodnews.org/). While the group says eating vegetables and fruits treated with pesticides is better than not eating vegetables and fruits, the guide points out that consumers can lower their pesticide consumption by almost 80% by avoiding conventionally grown varieties of the 12 most contaminated fruits and vegetables. This info comes from a great site with a tool to determine how much pesticide is on a certain food: What’s On My Food? (http://bit.ly/deSUFh) Remember, non organic foods that contain anything that grew (Oils, Meat, Flour etc.) also contain pesticides. 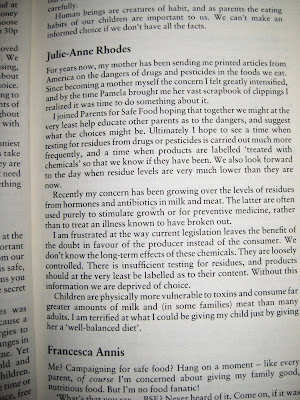 An excerpt from the Safe Food Handbook, 1990

6.Factory Farmed Meat & Poultry – We eat everything they do. As with most conventional crops, the grain fed to livestock is heavily sprayed with pesticides and other toxic chemicals. This causes health problems for the animals that eat the grain, and also for us when we eat the meat of these animals. The grain that conventional farmers feed their livestock is often very poor in quality. In many cases, farmers save money by purchasing grain that failed inspection for human consumption, usually because of mold growth (via ShareitFitnesshttp://bit.ly/buesLA).

By eating meat from the animals that eat this grain, humans are exposed to the mold toxins. In general, the meat from purely grain fed livestock is not very nutritious, especially if the grain is of poor quality. The potential for the meat to contain toxins makes it a health risk as well. The connection between unhealthy livestock and the grain only diet should be a matter of common sense. But instead of choosing to improve livestock health through a better diet, conventional farmers compensate by feeding their livestock grain that’s laced withantibiotics. Antibiotics originate from toxins produced by fungi. Anti biotic literally means anti life. Antibiotics kill without discrimination, and as a result, good bacteria is killed along with the bad. Because antibiotics are toxins and enter your blood stream, they can also cause unwanted problems anywhere in your body. They become infected by parasites and develop cancer, glandular swelling, infectious arthritis, pneumonia, and other serious health issues. What’s most frightening is that the FDA allows the meat from these sick animals to be passed along as long as any relevant tumors or lesions are removed. With the use of grains, fillers, antibiotics, and hormones, conventional farmers are able to bring a steer to full size in less than a year and a half. Under natural conditions, it would take 4 or 5 years. Also, To further accelerate growth, they feed synthetic hormones to their livestock. Synthetic hormones are often associated with cancer. (via ShareitFitnesshttp://bit.ly/buesLA) A far better choice, unless you remain vegan is Grass-fed & Grass-finished, free range beef and organic chicken. Here’s some info on how to switch:http://huff.to/91fPSB

7.Soy–It’s likely GMO and processed. That makes it like every other processed food. The good for you soy is, NON-GMO and fermented. After a long fermentation process, the phytic acid and antinutrient levels of the soybeans are reduced, and their beneficial properties — such as the creation of natural probiotics — become available to your digestive system. The fermentation process also greatly reduces the levels of dangerous isoflavones, which are similar to estrogen in their chemical structure, and can interfere with the action of your own estrogen production. (via Dr Mercola.http://bit.ly/adzwZ7) AvoidSoy Protein Isolate, a common processed soy in health foods and fitness bars.If you want to eat soy that is actually good for you, try natto, tempeh, miso and soy sauce. 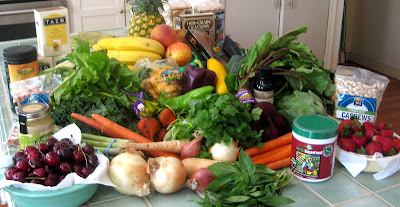 Goodies from my cleanse grocery shop

To your long life and great health! 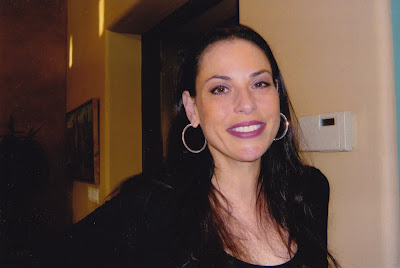 Jewels
Thank you so much Cynthia! I asked her to share some of her expertise with all of us here in the hopes that you will start seeing the truth about what we are complacently allowing to happen to our food supply, and the importance of how your consumer dollar is spent. Yes, the groceries and convenience of eating right may be more costly than buying all the processed crap, but it is much less painful and expensive than the medical care it could eventually lead you to need.
If you are interested in priceless pearls of wisdom – check out Cynthia’s blog. Every post I read resinates so deeply within, I guarantee it is worth your time!
« Previous PostNext Post »
Tags: Cynthia Occelli, factory farmed meats, GMO. pesticides, high frutcose corn syrup, Julie Anne Rhodes, Parents for Safe Foods, partially hydrogenated oils, soy protein isolate