I hated Paris when I first lived there. While my ex spent every waking hour in the studio recording first ‘A View to a Kill’ then the ‘Arcadia’ album, I was left to fend for myself in what I initially found to be a cold, unfriendly city. Oddly, only the fashion world felt welcoming by day, not how one would normally describe the business. Oh! And my beloved Bar Theatre… a brasserie down the street from the Plaza Athenee Hotel where we lived. Every day I would sit there alone after my castings, tears dripping into my comforting croque monsieur that made the perfect cheese pull with every bite. The waiters would do mime to bridge the language barrier in hopes of cheering the American in despair.

Julie Anne Rhodes for Jill Magazine
You see, I was endlessly frustrated by the butcher who wouldn’t serve me because I put the accent over the wrong end of jambon (as if he didn’t know what I meant when pointing to the damn ham ordering “à six pièces de jambon s’il vous plaît“), the crazy taxi driver that clutched my arm so hard it hurt, insisting I accompany him to the police station after I witnessed an accident (I broke free and ran into Hermes for shelter – they had to shut the store down to protect me from that lunatic), or the time I was held for six hours at the Supermarche for counterfeit money that wasn’t counterfeit, and overheard the manager threaten (in French) to fire the nice Russian sales clerk, if she translated one more word for the American bitch. I did understand quite a bit of French, I just didn’t want to communicate with these people after being chastised for trying.

Julue Anne Rhodes for Jill Magazine, Paris
By night, Paris was another story. Famed photographer and friend Peter Beard was determined to make me fall in love with Paris. Every evening when he finished at Yves Saint Laurent, he would ring my room for me to meet him in bullshot country, meaning the Plaza Relais bar, with a posse of interesting characters in toe to introduce to me. Mick Jagger, Jenna de Ronay, and Iman among them. Dinner would either be at Natasha’s, Le Copoule, L’Amis Louis, or Dave’s. The evenings inevitably blurred into the next morning after, quite literally, dancing on table tops at Les Bains Douche all night. Yes, I adored Paris by night. Peter was successful. 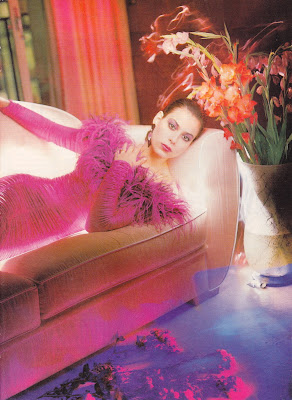 The flat on Avenue Montaigne by Dean Chamberlain
I also enjoyed being ensconced in the splendid luxury of the hotel, so I went kicking and screaming all the way when, when after six months and a monumental bar bill that PB and I ran up, Nick forced me to move into a flat across the street. That was a big mistake. Cartier and Maude Frizon were right downstairs, so the move actually cost him a great deal more money. Every time new stock would arrive, the store managers would delightedly run out to collar me on my way into the building. It would’ve been rude to say no!
I think Nick purchased that flat, because it made great dinner conversation mentioning that Marlene Dietrich lived in our building. Long before the intrusive paparazzi we know today existed, I would often look out of my kitchen window as I made my morning coffee to find cranes with photographers desperate for pictures of the reclusive legend. At times, even Nick and I would loiter in the hallway hoping to catch a glimpse of her as her friends arrived to play mahjong each week.

Cest’ Chic! Julie Anne Rhodes and Nile Rodgers
All this reminiscing started after bumping into ‘View to a Kill’ producer, Nile Rodgers as he was writing his soon to be released biography. Nile and I never shared croque monsieurs, but Meryl Streep and Steve Martin certainly made them popular again in the hit film ‘It’s Complicated’.
Croque Monsieur
Servings: 4
Ingredients:
for the Mornay (cheese) sauce
assemble the croque monsieur
Directions:
1). Preheat oven to 400 degrees F.
for the Mornay (cheese) sauce
2).Melt the butter in a small saucepan over low heat. Add flour and cook for two minutes to rid it of the starchy flavor. Slowly add hot milk, stirring constantly, until sauce is smooth and thickened, using the back of the wooden spoon to press out any clumps.
3). Remove sauce from heat and immediately add 1/4 cup of the Parmesan, 1 cup of the Gruyere, salt, pepper and nutmeg. Stir until cheese is melted.
assemble the croque monsieur
4). Toast the bread. Spread 1/2 teaspoon of Dijon onto each of the toasted slices.
5). Place 4 of the toasts on a jelly roll pan (mustard side up), top with the ham, 3/4 cup of the reserved Gruyere divided between the 4, then the other 4 slices of toast on top. Spread Mornay sauce evenly over each sandwich and sprinkle with the 1/4 cup remaining Gruyere.
6). Bake in the middle shelf of the preheated oven for 5 minutes. Turn on broiler, move to top shelf in oven and broil until golden brown on top, about 3-4 minutes. Serve immediately.
Serving Suggestions:I prefer mine “straight up”, but in the film it was served with a fresh green salad, or you could add French fries.
Variation: I will sometimes make the Mornay sauce with a pinch of cayenne instead of the nutmeg for a little spicier kick.
« Previous PostNext Post »
Tags: Cartier, comfort food, croque monsieur, Iman, Julie Anne Rhodes, Marlene Dietrich, Meryl Streep, Mick Jagger, Nile Rodgers, Paris, Peter Beard, Steve Martin, Yves Saint Laurent