It seems my daughter has a penchant for rock stars (okay, more R&B with a dose of country) too.

Pirate Sam giving little mermaid Tatjana a fifth birthday kiss
She must have instinctively known that one day we would be sitting in the audience watching her childhood friend, Sam Bradley, performing to sold out crowds heaving with over zealous women – not unlike her father in his hey day.

Bobby Sam next to ballerina Tatjana at her third birthday
I wrote about my friendship with Sam’s mother Lee Lindsey, seen taking pictures above, in The Housewives on Vacation earlier this month. It was lovely to have her come stay with me last week, while Sam played the first in a series of shows every Tuesday night for the next month at the Hotel Cafe in Hollywood. 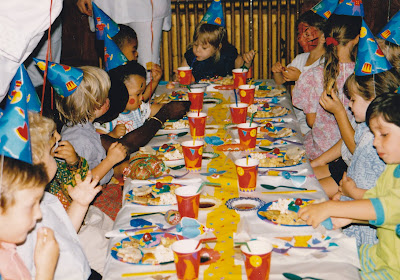 Tatjana and Spiderman Sam at her fourth birthday
When writing Tatjana’s birthday blog last summer, I realized that year after year the two were inseparable – Sam is always right by her side. 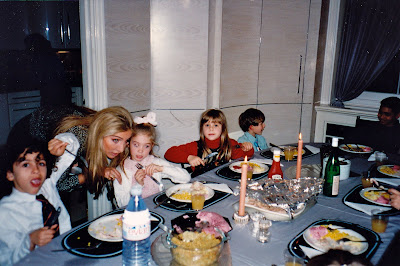 Tatjana and Sam sitting together again Thanksgiving 1993
Forever protective of both his sister Grace and Tatjana, he is still a gentleman today in spite of his rapidly rising stardom since co-writing “Never Think” with pal Rob Pattinson for the Twilight soundtrack.

The Sam Bradley Band on stage at Hotel Cafe
“We aren’t in Kansas anymore Toto,” and little Sam has definitely grown up. He commanded the stage and the crowd like an old pro, belting out heartfelt songs in perfect pitch while flirting tongue in cheek with his mostly female audience who were on their feet dancing and screaming for more.

The packed, sold out audience
Placating them with several new songs off the album he just finished recording.

Julie Anne Rhodes and Lee Lindsey
I’ve never been more proud to be a groupie in my life, and so happy I got to share it with Lee last Tuesday, as well as with Tatjana over the next few weeks.
In honor of my English rose daughter (or to annoy her) Tatjana, who you might recall wrote a poem called “I Hate Fish Pie” when she was little… I thought it would be nice to have some Poached Salmon, an English summertime tradition.

Poached Salmon with Dill Sauce
Servings: 8
Ingredients:
Poached salmon
Dill Sauce
Directions:
1). Bring the wine, water, lemon, bay leaves, parsley, garlic, and green peppercorns to a slow boil, add the salmon, bring back to a slow boil making sure liquid cover the fish. Cover the pan, lower heat to low, and simmer for 8-10 minutes.
2). Place on a platter to cool, cover and refrigerate a minimum of 2 hours or until ready to serve.
3). To make the dill sauce, whisk creme frais, mayonnaise, onion, lemon juice, lemon zest, and dill together. Stir in cucumber and season to taste. Cover and refrigerate until ready to serve.
Serving Suggestions: Serve cold garnished with paper thin cucumber slices, and cold dill sauce. A mixed green salad, and new potatoes with parsley butter will round it out nicely.
Variations: Serve with my Wasabi mayonnaise (from the Jewels Turkey-Jasmine Burger recipe) for an Asian flare, spice it up with a smokey chipotle sauce for a Latin flavor, or a minty Tzaziki sauce for a Greek twist.
« Previous PostNext Post »
Tags: band, birthdays, dill sauce, Hotel Cafe, poached salmon, Rob Pattinson, rock star, Sam Bradley, Tatjana Rhodes, Twighlight soundtrack